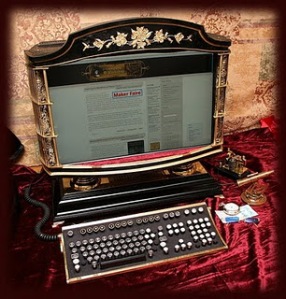 I’m at the end of my four-day Christmas break, watching “The Witches of Eastwick” (Susan Sarandon, Cher, Michelle Pfeiffer, and Jack Nicholson – let’s see, Michelle Pfeiffer and Jack Nicholson both played villains in different “Batman” movies; the family had a couple of “Batman” discussions over the break, including how many stars have played Batman, who were the bad guys in each one, etc. Guess my brain hasn’t moved on, plus I love playing “what other movies have these stars been in together?”).

Spent Christmas eve and Christmas day at the family’s house – the whole family holiday get-together has changed over the last couple of years, and maybe you have noticed it at your house, too – while talking and watching television, and eating, we are also checking email, playing games, checking Facebook, texting, and looking up stuff.  (I’m mostly knitting and chasing the dog, but I’ve also been known to take a peek at my email, and lots of peeks at Facebook – in addition to being ADD, I also have a touch of ocd; just a touch, so it’s in small letters).  Everyone has a cell phone, and there are also iPads and laptops lying around, in case someone gets an uncontrollable Angry Birds urge.  (My husband was startled one afternoon, when, out of nowhere, he heard me yell, “Die, pig, die!”  while sitting on the couch with the iPad in my hand.  It’s not a relaxing game, but it is irresistible).

When in my lap, my dog will actually push my hands away from the keyboard so he can be petted – he believes he is the alpha laptop, and isn’t pleased about sharing real estate with my Mac.  I wonder if any studies have been done on animals who live with families who have no computers or cell phones, as compared to those who live with families who have multiple devices, and if there are differences in health, mental state, and behavior. Might make for an interesting experiment, if the variables were controlled (sorry, my psych minor is showing, or should I say, my almost-finished minor – I balked at statistics, so there you go).

I think one of my New Year’s intentions will be to have more conversations, and limit the technology in my life – the phone is silenced more than before, and now I have to work on curbing Angry Birds and Facebook (not eliminating either, I love Angry Birds, and Facebook has brought some wonderful people back into my life.) We’ll see; maybe you can text me and let me know what you think…ha!

(P.S.  I don’t know if this is obvious, but the title of this post is meant to be read to the Eric Clapton song, “I Shot The Sheriff.”  Yes, I am a little bit corny, and a little bit rock and roll…)

What is she writing about?